The Inklings Institute of Canada is a new centre for research and writing on J.R.R. Tolkien, C.S. Lewis, and other writers who were part of a literary group in Oxford during the 1930s and 1940s. Like Tolkien and Lewis, many of the Inklings were academics at Oxford University, and they shared a common interest in narrative fiction and fantasy. Gatherings were informal, in the evenings at Oxford or mid-day at a local pub, spent mainly reading and discussing their works in process.

The new Inklings Institute is part of Trinity Western University in Langley, B.C., about a half hour drive from where I live. The first of its kind in Canada, it’s led by two English professors who serve as co-directors and envision the institute as an interdisciplinary effort to contribute to international research. For more on the Institute, see the recent news release and list of public events.

In August I had the great privilege of being on a Mennonite Church Canada learning tour to the UK that included a wonderful day in Oxford. Our main purpose was to meet with people related to the Anabaptist Network UK, but I also took note of various literary sites like the offices of both Lewis and Tolkien, as well as Christ Church which was a location for the Harry Potter movies. Our group also had lunch at the pub where the Inklings often met.

Formally called The Eagle and Child, the pub was nicknamed The Bird and Baby or simply referred to as The Bird.

The Inklings met at the back of the pub, but since their time that space has been renovated and enlarged so it’s quite bright and much more like any restaurant than the darker pub I had imagined. Still, I couldn’t help but think of myself as an honorary Inkling, and if not welcomed in their brotherhood, then maybe I’d meet with novelist and theologian Dorothy L. Sayers, who wasn’t exactly an Inkling either, but a friend of C.S. Lewis and included in the newly formed Inklings Institute.

There was a lot to fuel my imagination at The Bird and Baby. It was the first pub where I noticed a shelf of books and games: 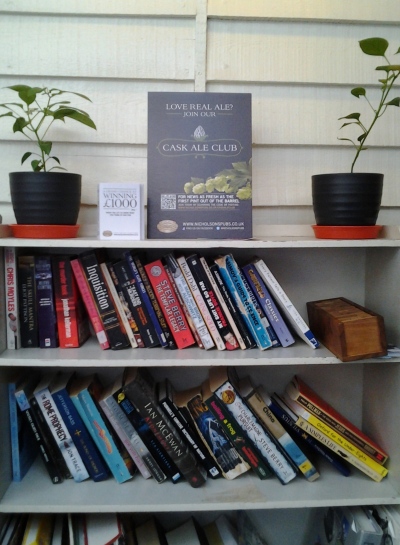 A quiet corner to sip a pint and read under images from The Hobbit:

The pub even had its own door to Narnia:

Unfortunately the door was locked, so instead of stepping into adventure in Narnia, our group happily continued with our tour of Oxford 🙂

6 thoughts on “A New Centre for Research on Lewis, Tolkien, and Other Inklings”