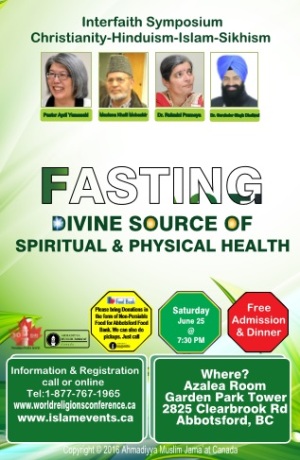 Last year I participated in an Interfaith Symposium for the first time, and this year I gladly accepted a second invitation, again as part of a panel with several speakers, this time on fasting as a divine source of spiritual and physical health.

Like last year, I was impressed by the warm welcome of our hosts, the Ahmadiyya Muslim Jama`, and am grateful for the opportunity to share as a Christian in a mutually respectful setting. I began with words of greeting, thanks, and a blessing of peace for our gracious hosts, our moderator, other speakers, and all those who had gathered. Then I turned to our assigned topic.

Like last year, I was invited to speak first, and unlike last year, there was another woman on our panel who spoke next. Mrs.Rukmini Prameya shared a Hindu faith perspective, then Maulana Khalil Ahmad Mobashir with an Islam perspective, and Dr. Gurvinder Singh Dhaliwal with a Sikh perspective. Opening remarks were offered by Deputy Mayor and City Councillor Moe Gill and closing remarks by Eden Engen, who is a Director of Public Affairs for The Church of Jesus Christ of Latter-Day Saints. While we came with diverse backgrounds and faith, it was good to come together for an evening of sharing and mutual respect.

As a Christian, my faith is grounded in Jesus Christ, whose life, death, and resurrection changed human history, changed people’s lives, and continues to change people’s lives and hearts today. In the Christian Scriptures, the letter to the Hebrews points out how God spoke through the prophets many times and in many ways, and finally spoke through his Son (Hebrews 1:1-4). We believe that Jesus came to save the world, to show us a new way to live in his life, death, and rising again. We believe that Jesus was God in human form, that he came to bring peace and reconciliation in all our relationships, and he is with us still even at this moment by God’s Spirit.

There are many different groups within Christianity that emphasize different parts of this Christian story. For some Christians, the most important part of Jesus’ story is his death. Although Jesus himself lived a sin-free life, he was executed like a criminal. At the time he lived, execution meant being nailed to a cross and put on public display for everyone to see. It was a painful and degrading death, and some Christians understand Jesus mainly as a suffering Saviour who brings forgiveness from sin.

For other Christians, the most important part of Jesus’ story is his resurrection. After his horrible death, Jesus was buried in a tomb that was sealed with a huge stone and guarded by the Roman military, but three days later by the power of God, he came back to life. So some Christians understand Jesus mainly as a risen Saviour who triumphed over death and brings new life.

For other Christians, the most important part of Jesus’ story is his life. In his teaching and in the way he lived, Jesus showed us the love of God and called us to follow in his steps. So some Christians understand Jesus mainly as an example to follow in our daily lives.

I believe that all three parts of Jesus’ story are important and work together. Without his life, there would have been no death.Without his death, there would have been no resurrection. So as a Christian and as a church leader, I believe and teach that the whole of Jesus’ story is important. By faith, we can acknowledge his death on the cross and receive God’s forgiveness for all of our failures. By faith, we can accept his resurrection, and rely on the same power of God that raised Jesus from the dead. By faith, we can seek to follow the example of Jesus in our daily lives.

Just before Jesus began his earthly ministry, the gospel of Matthew recounts how Jesus spent time fasting and praying in the wilderness for 40 days and nights (Matthew 4:1-11). This was not a designated period of fasting at a certain time of year, but Jesus’ fasting was prompted by the Holy Spirit as a time of personal significance and decision making as he was about to begin his public ministry.

At the end of his fast, he was at peace with God and sure in his purpose. So for Jesus, fasting was a time for spiritual health and clarity.

Besides Jesus’ own example, he also taught his followers about fasting. Again from our Scriptures in the gospel of Matthew, Jesus said (Matthew 6:16-17):

whenever you fast, do not look dismal, like the hypocrites, for they disfigure their faces so as to show others that they are fasting. Truly I tell you, they have received their reward. But when you fast, put oil on your head and wash your face, so that your fasting may be seen not by others but by your Father who is in secret; and your Father who sees in secret will reward you.

In this text, Jesus’ teaching on fasting was not directed to when his disciples should fast. Instead Jesus focused on why they should fast and how.

They were not to fast as a show for others. They were to fast only for God. They were not to go around unwashed and looking dismal. That was a common practice for fasting as a sign of mourning. But for other times of fasting, Jesus said they were to wash their faces and look presentable so that no one but God would even know that they were fasting. Like Jesus alone in the wilderness, fasting  was a personal practice for their spiritual health.

In our Scriptures, fasting is often accompanied with worship and prayer. So when Jesus was first born and taken to the temple, the gospel of Luke 2:36-37 says:

There was also a prophet, Anna, the daughter of Phanuel, of the tribe of Asher. She was of a great age, having lived with her husband seven years after her marriage, then as a widow to the age of eighty-four. She never left the temple but worshiped there with fasting and prayer night and day.

In the early church, the book of Acts 13:2-3 describes a time of fasting this way:

While they were worshiping the Lord and fasting, the Holy Spirit said, “Set apart for me Barnabas and Saul for the work to which I have called them.” Then after fasting and praying they laid their hands on them and sent them off.

These are just a few examples of how the Christian Scriptures focus on fasting for spiritual health and discernment.

Our Scriptures say less about fasting for physical health, but the clearest example appears in the book of Daniel (Daniel 1:1-21). In this story, four young men were captured and placed in the service of a foreign king. But instead of eating the king’s food and drinking the wine provided by the king, they decide to fast from meat, fast from alcohol, fast from any kind of rich food. Instead they would eat only vegetables.

The palace master feared that the four men would become unhealthy if they refused the king’s food and wine, but he was persuaded to let them try it for 10 days. After 10 days, they were still healthy—healthier than all the other young men who were eating the king’s food and wine. So they continued with their partial fast for another three years as they prepared for service in the king’s court. When their time finally came, the king found that they were physically and mentally sound, with more wisdom and understanding than any of his other advisors.

Today, this kind of fast is sometimes known as The Daniel Fast, a partial fast that restricts only certain kinds of food and drink. Other types of fasting include the absolute fast which calls for no food or water of any kind. For example, in the book of Esther, when the Jewish people were in danger, Esther called for all the people to observe an absolute fast with no food or water for three days (Esther 4:16). There is also the standard fast which is no food or drink except for water.

Each type of fasting may have physical benefits, like promoting healthy weight and healthy energy, promoting digestion and detoxification. In the Daniel story, the four young men remained physically healthy for their 10 day trial period and for their entire three years of training before they began serving in the king’s court.

Each type of fasting may also have mental health benefits, like clarifying thought and purpose. Jesus clarified his sense of mission as he fasted and meditated on Scripture and prayed in the wilderness. The early church discerned and sent out workers by fasting, worship, prayer, and laying on of hands.

Each type of fasting may also have spiritual benefits. Like Anna who fasted and prayed in the temple. Like some of us who spend time in prayer and service instead of eating and drinking–as we learn to rely on God instead of relying on food.

God as the Divine Source of Health

In these ways, fasting is a source of spiritual, mental, and physical health.

So, whether you eat or drink, or whatever you do, do everything for the glory of God.

We might paraphrase this today: Whether you feast or fast or whatever you do, do it all for the glory of God.

God’s peace to you. And may God grant you spiritual, mental, and physical health today and always.

5 thoughts on “In the Christian Faith, How is Fasting a Divine Source of Health?”