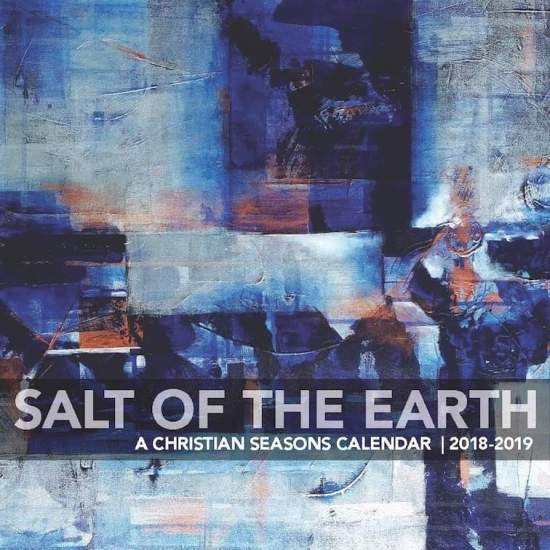 The liturgical calendar is a beautiful art calendar produced by University Hill Chapel, and you can see samples of the 2019-2020 version which is now available for purchase.
One of the great features of this calendar is that it lists the lectionary Scripture readings for each Sunday, which makes it a beautiful and useful resource for churches and anyone who follows the Revised Common Lectionary. But I also realize that for those unfamiliar with the lectionary, having a separate liturgical calendar must seem confusing!

In this article I address some common questions about the Revised Common Lectionary, and if you’d like to know more, please refer to the links provided or add questions in the comments below, and I’ll try to answer them. I’m still learning about the lectionary too!

What is the Revised Common Lectionary (RCL)?

A “lectionary” is a collection of Scripture readings. The RCL was put together by a number of different denominations in the US and Canada, so they worked on this in “common” with one another. It was first drafted in the 1980s, then tested in churches and “revised” in 1992. The RCL is used by various denominations in Canada, the U. S., and around the world.

How are the lectionary readings arranged?

How is the RCL used?

Many denominations and churches use the RCL as a resource for worship. So for example, at Valley CrossWay Church where I serve as resident author, every Sunday we read—or in the case of Psalms, we sometimes sing—all four Scripture passages designated by the RCL. Together, these Scripture texts help shape the prayers, songs, sermon, and overall message for our morning worship.

What are some of the benefits of using the RCL?

At Valley CrossWay, reading all four Scripture passages from the RCL means that we read more Scripture than we might otherwise. We gain a sense of the broad sweep of Scripture as we read through the major portions of the Bible in the three-year cycle. Plus we foster a sense of unity with other churches and denominations that focus on the same texts from Sunday to Sunday.

But doesn’t the lectionary leave out portions of the Bible?

Yes. Vanderbilt Divinity Library has an excellent online resource that lists all of the lectionary readings included in the RCL. You can find that resource here, and in the top right corner of that page, click on the open Bible icon, and you will see a list of all of the readings according to book of the Bible with chapter and verse. From there you can identify which portions of the Bible have not been included in the lectionary—examples include Psalm 3, Matthew 1:1-17, 2 John, 3 John, to name just a few texts.

What are some of the challenges of using the RCL?

The RCL does not include every portion of the Bible, sometimes texts are cut short, and the four lectionary readings on any given Sunday may sometimes seem chosen at random, and may or may not be closely related to one another.

This past weekend at the American Academy of Religion and Society of Biblical Literature meetings, I attended an excellent session on some of the challenges of preaching from the RCL. In the general discussion on its benefits and challenges, I noted one comment from the gathering that described the RCL as “helpful but not sufficient.”

I had already written most of this article before the session, but that comment prompted me to add the following list of a few things that I find useful as I work with the RCL for worship and preaching:

Be aware of what’s left out.
When I preached last August, the lectionary reading for my Sunday was Hebrews 11:1-3, 8-16, but the litany of faith is really the entire chapter including verses 4-7 which the RCL omits. What’s more, verse 13 says, “All of these died in faith” which would include Abel, Enoch, and Noah even though the RCL skips over them. In this case, and when preaching on other texts, I sometimes include the extra verses even when the RCL excludes them.

Preach a series.
On most Sundays, those who preach at Valley CrossWay choose one or more of the lectionary texts as the focus for their sermon, but this fall, we did a series on the gospel of Luke. We still followed the lectionary readings, but instead of choosing the psalm or one of the other designated readings, we each worked with the Luke text for our Sunday. That helped give a sense of continuity and countered the sometimes choppy feeling of moving between different lectionary readings.

Don’t rely solely on the corporate reading of Scripture at church.
Read or listen to the Bible on your own, with your family, or small group. Use a devotional guide or read other Christian literature. The RCL doesn’t include every portion of Scripture, but there’s no reason you can’t read those portions on your own.

Take time out from the RCL.
For some churches, it may seem unthinkable to take a break from the RCL, but in my previous church we tended to use the RCL only during the seasons of Advent, Christmas, Lent, and Easter. In summer we would often do a book study, like the time we preached through the book of Ecclesiastes. The RCL includes only selected verses from the first three chapters of Ecclesiastes, but the book has 12 chapters with much more wisdom to share.

The Consultation on Common Texts

This is the site for the Consultation that put together the RCL. It includes more information about which churches use the RCL and why. You can also download the RCL and Introduction.

Frequently Asked Questions About the RCL

This is another part of the Vanderbilt Divinity Library resource referenced above that offers more background on the RCL, the seasons of the church year, and other details.

The Text This Week

In addition to the Vanderbilt Divinity Library resource,The Text This Week is one of my go-to resources for the RCL and related resources.

What’s the Text? Alternatives to the common lectionary

A helpful overview from the Christian Century magazine.

A pastor friend uses this Narrative Lectionary, which is a four-year cycle of readings built around the biblical story from creation to the early church. When I preached from her church earlier this year, she said the narrative lectionary for that Sunday was the Great Commission, Matthew 28:16-20, which was paired with Psalm 40:9-10. I spoke on Psalm 40:1-10. At the RCL session on the weekend, the narrative lectionary was also mentioned as an alternative to the RCL.

Writing/Reflection Prompt: What benefits and challenges have you experienced with the Revised Common Lectionary? If the RCL is not part of your experience, how do you choose what Scripture to read? How does your church choose Scripture for worship and preaching?

a bonus copy of How to Pray When Prayer Seems Impossible

7 thoughts on “What is the Revised Common Lectionary? (for R who asked)”

It's a pleasure to welcome you to my website--thank you for stopping by!

My name is April Yamasaki, and I write about Scripture, prayer, and other acts of faith in everyday life.

How do we pray when we can't find the words and prayer seems impossible? How does Scripture speak into the joys, concerns, changes, and challenges we live every day? What does it mean to act on our faith? These are vital, ongoing questions, and I'm eager to explore them with you.

So please take a look around--you'll find my latest articles on my home page, my most recent books below plus a complete list here, information on my speaking, and a more formal bio here.

Please feel free to leave a comment at the end of any article, share on social media, or contact me for writing, speaking, or just because. I would love to keep in touch:

You can also find me at When You Work for the Church: the good, the bad, and the ugly, and how we can all do better. Check out these top posts:

The Good, the Bad, and the Ugly

What Do You Do When Your Job is Terminated Through No Fault of Your Own?

Is Self-Care Part of Your Paid Employment and Should It Be?

Is There a Better Way to Terminate an Employee?

The Most Hilarious Job Description and How to Update Yours

For details and ordering info on my most recent books, click on the cover below. For a list of all my book publications, please see my Published Books.